In the current times, trade dress (e.g., packaging, colour scheme and overall appearance) along with a product name has a lasting impact on the consumer experience and brand recall. The trade dress of the product is being given special attention by the brand owners to distinguish their products from competitors and build affinity for their brand. With many consumers during this pandemic phase buying goods online, the brand owners are finding it challenging to protect their product packaging as it is easier to digitally copy them. Further, to enforce rights in a trade dress, packaging and other brand elements involve establishing distinctiveness and identifying whether a product packaging/trade dress has attained secondary meaning and association with the rights holder by virtue of its use.

Where the design, shape, layout or colour scheme either on its own or jointly with other elements has not been registered as a trademark or does not qualify for registration, the owner of the trade dress can still exercise common law rights by filing a suit for passing off. Where passing off is claimed, the court may consider and compare the competing trade dresses in their entirety to reach a prima facie decision of whether there is a likelihood of confusion.

The legal proposition on protection of trade dress has come a long way since the Delhi High Court decision (of 1996) in Kellogg Company vs Pravin Kumar Bhadabhai and others. The court denying injunction to Kellogg observed that “……on our prima facie conclusions, we reject the plea of similarity or likelihood of confusion, we reject the plea of fraud as well as the one based on imperfect memory. We are of the view, prima facie that even though the get up is similar, the different names Kellogg’s and AIMS ARISTO prominently displayed, make all the difference and this is not a fit case for interference with the order of the learned Single Judge refusing injunction”.

The court took a different view in Colgate Palmolive Co v Anchor Health and Beauty Care Private Limited (2003 (27) PTC 478 (Delhi)). Colgate here sought an interim injunction against the defendant’s use of the trade dress and colour combination of red and white in relation to identical products (tooth powder), even though the rival marks were completely different. Acknowledging trade dress protection and granting injunction in favour of the plaintiff, the Court observed “There is a wide protection against imitation or deceptive similarities of trade dress as trade dress is the soul for identification of the goods as to its source and origin and as such is liable to cause confusion in the minds of unwary customers particularly those who have been using the product over a long period”

In Skechers USA, Inc. & Others v Pure Play Sports and Others (CS(COMM) 573/2016, the plaintiff (Sketchers) brought passing off action and alleged that defendant had copied unique and distinct features of the trade dress of its GoWalk footwear series in relation to identical products and cause confusion. The images of competing  products are depicted below: 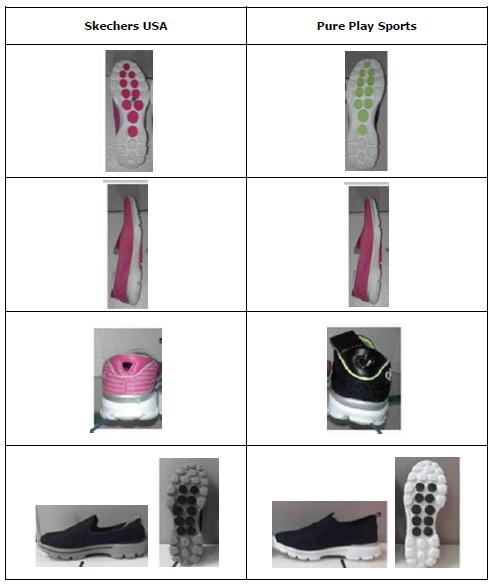 The defendant refuted the claims and stated that rival marks on the products are different, difference in product price, texture of materials used in the shoes is common to trade and no confusion would be caused. The court ruled in favor of the plaintiff on May 5, 2016, and observed that

In the year 2018, permanent injunction was granted in favour of Skechers USA and costs of Rs. 87 lakhs (approx. US$ 113,788) were imposed on Pure Play Sports.

On January 9, 2020, the Delhi High Court in Puma SE v Campus Activewear Private Limited (CS(COMM) 8/2020), restrained the defendant from dealing in goods bearing the plaintiff’s (Puma) unique trade dress, get up, layout and placement of distinctive features placed on RSX 3D series. In this case, the plaintiff brought a suit for passing off, unfair competition, damages to stop unauthorized use of the trade dress, get up and layout of distinctive features placed on RS-X-3D series footwear by the defendant.

With healthcare taking a centre stage during pandemic, the consumers were increasingly buying the vitamins and other nutraceutical products to build immunity. Thus, many lookalike products with similar packaging and brand name were launched by the local companies to garner market share, and brand owners had to take enforcement measures to protect their brand sanctity.

As an example, Abbott Healthcare during 2020 and 2021 brought a series of actions at the Delhi High Court and District Courts against misuse of their mark LIMCEE with similar packaging. As Vitamin C was being prescribed by doctors to build immunity during Covid phase, Abbott brought a series of lawsuits against parties selling LIN-C, LEMONSEE, LIMEECEE, LICMEE, SUCKCEE and others with similar packaging as depicted below:

In Sun Pharmaceutical Industries Limited v Nukind Healthcare Private Limited and Another (CS(COMM) 209/2021), the plaintiff (Sun Pharma) being registered proprietor of REVITAL trademark/label/carton packaging and trade dress, alleged that the defendants had copied similar color combination for the carton packing, capsule device label, placement of the words Mineral, Vitamins and Ginseng along with adoption of deceptively similar mark NUVITAL to cause confusion. On April 28, 2021, the court restrained defendant from using deceptively similar trademark NUVITAL as well as ‘REVITAL’ label/carton packaging/trade dress. 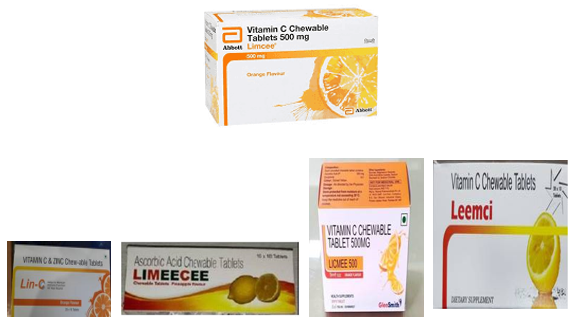 In Sun Pharmaceutical Industries Limited v Nukind Healthcare Private Limited and Another (CS(COMM) 209/2021), the plaintiff (Sun Pharma) being registered proprietor of REVITAL trademark/label/carton packaging and trade dress, alleged that the defendants had copied similar color combination for the carton packing, capsule device label, placement of the words Mineral, Vitamins and Ginseng along with adoption of deceptively similar mark NUVITAL to cause confusion. On April 28, 2021, the court restrained defendant from using deceptively similar trademark NUVITAL as well as ‘REVITAL’ label/carton packaging/trade dress.

Protecting shape along with other features

The shape of a product also helps to distinguish it from the rival products from other manufacturers and is protectable as a trade dress. The Courts have recognised rights in the shape of a product and restrained parties from using a product shape if it is likely to cause confusion regarding the source/ origin of goods.

Beiersdorf AG v RSH Global Private Limited & Another (CS(COMM) 48/2021), the plaintiff (Beiersdorf) alleged infringement of trade dress/packaging of its NIVEA cream and infringement of copyright in the artistic work of the NIVEA label/trade dress by the defendants dealing in beauty care and cosmetic products under the different name “Joy”. On January 28, 2021, Delhi High Court passed an order and observed that case for deliberate infringement is established and restrained the defendants from dealing in cosmetic products, especially body cream, lotion, or goods deceptively similar to the plaintiff’s distinctive trade dress. Also, the test for comparison is not to identify dissimilarities between rival products but compare them as a whole.

In Bacardi and Company Limited vs. Bahety Overseas Private Limited and Others (CS(COMM) 464/2021), the plaintiff (Bacardi) being the owner of two registered trademarks BREEZER and shape of the bottle alleged similarity between the rival marks BREEZER v ‘FREEZMix’ along with manner of representation, copying of distinctive features of the shape of the bottle by the defendant and overall presentation of the defendant’s product was similar. 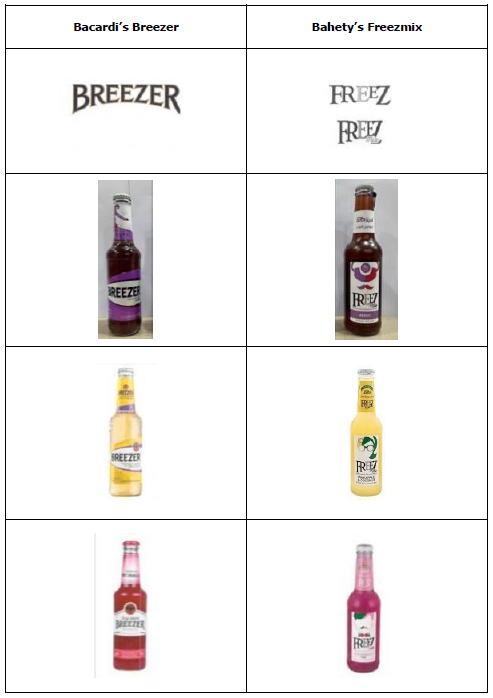 The defendants refuted the claims alleging that rival marks are different, shape of plaintiff’s bottle is common to trade, defendants trade dress of ‘FREEZMix’ is different. On November 12, 2021, the court ruled in favour of the plaintiff and observed that

In Apollo Tyres Limited v Pioneer Trading Corporation and Another (CS(OS) 2802/2015), the plaintiff (Apollo) relying upon unique tread pattern/trade dress for its tyre ENDURANCE LD 10.00 R 20 sought to restrain the defendant from using identical tread pattern in respect of its tyres under the trademark HI FLY HH505 to stop confusion amongst the consumers regarding source/origin of the goods. The defendants strongly contested the claim. On August 17, 2017, the Court ruled in favour of the plaintiff and stated that

The protection of trade dress is extremely significant in the Indian context where a large percentage of the population is illiterate and living in rural areas. For such consumers, colour schemes and packaging play a vital role in brand recall. In other words, appealing trade dress helps brand owners to reach all sections of society, including those who cannot read the trademark on the product. The importance of trade dress and design has been reinforced by growing judicial precedents which have made it clear that products are purchased not just by reference to brand names, but also by reference to their overall visual presentation and layout. Further, the search mechanism through images popularised by “google lens” and other similar Apps such as “Greenshot”, TinEye” and others indicate a growing trend of visual image search being used by consumers to find the similar products. Thus, reinforcing the importance of trade dress.

Please follow and like us:
Tweet
RNA Technology and IP Attorney is regarded as the IP trailblazer in IndiaNew Patent Suit rules to demystify patent litigation in India