The Delhi High Court in its judgement dated 2nd August, 2022 examines the criteria of a “new and original design” and what constitutes trade dress infringement. The court in a suit for infringement of the registered design and passing off brought by Diageo Brands B.V. & Anr.  (hereinafter ‘Diageo’) against Great Galleon Ventures Limited (hereinafter ‘Great Galleon) analysed the similarity of competing design of the bottles ( depicted below) and their trade dress. 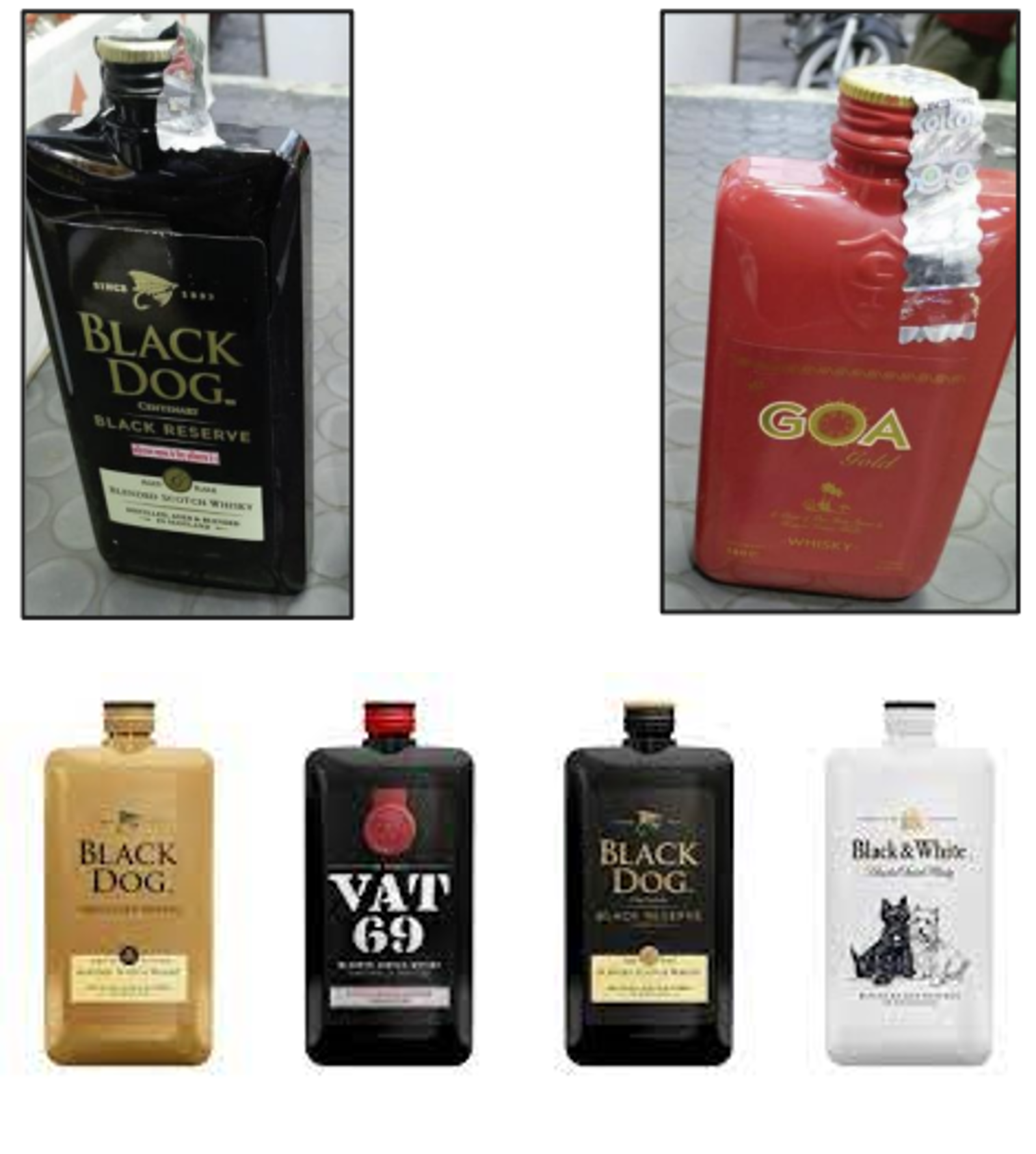 The Plaintiffs (Diageo) claims to be the proprietor of the registered design of the 180ml bottle used for its whisky brands “Black Dog (Black Reserve),” “Black Dog (Golden Reserve),” “Vat 69”, and “Black & White” (“HIPSTER bottles”). The Defendant (Great Galleon) manufactures whisky under the brand “GOA” and its variants, “GOA GOLD” and “GOA SPIRIT OF SMOOTHNESS”. The Plaintiffs alleged that products of the Defendant sold under the mark “GOA” and its variants in 180 ml bottles are a “slavish and fraudulent imitation” of its registered design and a dishonest adoption of the trade dress and overall get up of its bottle design (hereinafter HIPSTER Bottles). The Court at the admission stage was convinced tDiageo’s case:hat Diageo had made out a prima facie case and injuncted Great Galleon by way of an ex parte order dated 23rd February 2021 from selling whisky using the 180 ml bottles as depicted above. Defendant opposed this injunction, seeking vacation/setting aside of the order.

The Plaintiff claims that the design of the bottle has the following essential features:

(a) tall, lean, and sleek look, (b) rectangular shape inspired by the shape and proportion of a smartphone; (c) smooth rounded shoulders and symmetrical edges; (d) protruding V-shaped neck situated at the middle of both shoulders; (e) symmetrically raised and plateau-like front and rear walls; (f)two-toned rimmed and rounded cap; and (g) dimpled bottom. The said essential features form the ‘shape and configuration’ of its distinctive design, compositely creating a visual impression that is ‘appealing to the eye’. No third party has ever adopted a 180 ml bottle/packaging of a similar ‘shape and configuration’ with such a novel design.

The Court examined the following questions while determining the injunction.

Court’s observation: The controversy arose about whether the agency engaged by Diageo was the rightful owner of the design. The Court noted that Plaintiff got the design outsourced, for which Plaintiff paid 1.5 million GBP. As per Section 2 (j) of the Designs Act, even when work is executed for one person by another, the first person would remain the proprietor of the design, and at no point will the person who executed the work retain any rights/ title for the work. Thus, Plaintiff is the proprietor of registered design No. 306577.

Court’s observation: The Court stated that there could not be any hard and fast rule that merely because a design registration is of a recent date, the Plaintiffs would not be entitled to an injunction. Given the lack of statutory distinction between the initial and later years of registration, the effect of registration must prevail uniformly over the course of the entire life of the registration.

Section 11, read with Section 2(c) of the Designs Act, grants the proprietor ten years from the registration date to exercise its exclusive right to apply its design to any article in the class in which it is registered. Under such circumstances, the date of design registration would not be of consequence.

Court’s observation: The Court observed that it is a trite principle of law that for determining infringement of designs, the yardstick is ‘visual effect’, ‘appeal to the eye’ of the customer, and ‘ocular impression’ of design, as a whole. The test is not to look out for subtle dissimilarities but rather, to see if there is substantial and overall similarity in the two designs. While applying this test, the Court had to be conscious that not every resemblance between the two designs would amount to infringement. The comparison by the eye has been made by physically holding in hand the Defendant’s impugned bottle alongside the Plaintiffs’. Unequivocally, at first blush, Defendant’s impugned bottles are remarkably similar to Plaintiff’s bottle design (hereinafter Hipster). All the unique, essential, and novel features of the Hipster: long, lean and sleek design, curved shoulders, ‘v’ element on the neck, etc. are found on the impugned bottle as well. In terms of shape, the bottles have identical necks, shoulders, joints, and edges. Both are identically rectangular in shape and have a dimpled bottom, which is nearly identical and has sufficient similarity to make it difficult for the consumer to distinguish one from the other.

The Court observed the impugned design need not be an exact replica to constitute infringement. Minor changes in size are insignificant as the overall, and substantial similarity is glaring and undeniably apparent to the naked eye.

The Court found that the Plaintiffs have established a prima facie case in their favour and have successfully substantiated their case that the Defendant’s impugned bottle design is an obvious and slavish imitation of the Plaintiffs’ Registered Design.

Court’s observation: The grounds raised by the Defendants for challenging the validity of the registered design are mentioned in the below table:

The Court thus found that none of the grounds put forth by the Defendant was valid for the cancellation of the Plaintiff’s design registration.

Court’s observation: The Court noted that the distinctiveness of a trade dress is not to be perceived by its individual elements in isolation but has to be seen as a whole to determine whether its essential features are distinctive enough to become a source identifier. Hipster is marketed in three colour variants: white, golden and black. The Defendant’s bottles are in the colour variants red and black. While all the bottles are in a dual-chromatic scheme, the Court noted there is indeed some grain of truth in the Defendant’s submission that the black-and-gold combination is common to trade and used by a plethora of alcohol manufacturers.

Similarly, a two-toned rimmed and rounded cap has been widely used in the said industry and is not unique to the Plaintiffs. Hence, upon comparing the trade dress as a whole, the Court found that the essential features are distinctive enough to become a source identifier.

Apart from the black & gold colour scheme, there is hardly any similarity in the labels, trade dress, and get-up. Thus, the Court was not entirely convinced that Defendant is imitating the same to deceive unwary customers. The Court held that Defendant’s purported imitation of the Hipster’s trade dress has not resulted in some tangible confusion regarding the origin or source of the goods. In coming to this conclusion court noted that the ‘GOA’ brand is boldly displayed on the bottle, the labels are largely dissimilar, and the price points of the goods are vastly different.

The Court found that there are undeniably some similarities which are quite visible, but they are largely occurring because of identical designs (for which Plaintiff is entitled to an injunction on account of design infringement) and the monochromatic colour of the bottles. However, at this interim stage, such similarities are insufficient to grant injunction on a passing off action, particularly when the trinity test, recounted above, is not met.

The Defendant (Great Galleon) was thus restrained from using the bottle design as it constituted Design Infringement.

The case has clarified important factors for comparing a registered design with the prior art to challenge its validity and clarified what constitutes prior publication.

Please follow and like us:
Tweet
No glee for ‘ASTRALGLEE’- Delhi High Court holds it similar to ASTRALGetting IP ready for India-Australia Economic Cooperation and Trade Agreement (ECTA)