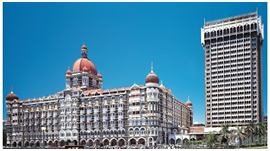 The story that was widely covered in main stream media with suggestions being made that henceforth royalty will need to be paid for taking a photograph of the building. There is an element of sensationalism in the news, however, the trademark granted to ‘Taj Mahal Palace’ hotel takes them into the elite club of trademarked properties across the world, namely, the Empire State Building, the Citicorp Center and Guggenheim Museum in New York; the Transamerica Pyramid in San Francisco; the Wrigley Building in Chicago; the Eiffel Tower in Paris and Sydney Opera House in Australia.

What happens if a third party commercially exploits the image e.g., to make coasters, fridge magnets or let us say postcards with image identical or similar to the registered mark. Will the registration recently granted help? The answer is – it will be persuasive, however, the owner of ‘Taj Mahal Palace’ hotel will need to establish its reputation and goodwill, that is, rely upon its common law rights that exist independent of registration to stop a third party from copying its trade mark. As per the Trademarks law, the current registration only grants exclusive rights in relation to services for which registration has been granted.

Taking photographs with the building

You are safe to take photos with ‘Taj Mahal Palace’ hotel in background during your next visit to Mumbai so long as the purpose is not to commercially exploit the image.