The following note examines the Indian Patent office position on grant of Industrial Design protection to Graphical User Interfaces and analyses a recent decision by the office which indicates that, though, a separate class exists which recognizes protection of such designs, the office is reluctant to register them, taking the view the graphical user interface cannot be held as an article of manufacture and thus, does not qualify as Design.

India joined the WTO as a member State in 1995 paving the way for enactment of a new Designs Act, 2000 to make the Designs Law in India TRIPS compliant. While the earlier classification system of 1911 Act was based on material characteristics of the article, the Design Rules 2001 and subsequent amendment in 2008 provided an elaborate classification based on Locarno Classification system. The new Classification of Goods introduced the class- 14-04, in the prevailing Design Rules, 2001 which was dedicated to articles belonging to: “Screen Displays and Icons”. The new classification recognized visual images, graphical user interfaces (GUI) or icons shown on an image display of a tablet computer and a Smartphone to be registrable under Design Law.

However, it seems, the Patent office is yet to register a single design under class 14-04. A few instances where icons and screen displays have been registered were accepted under Class 14-99, titled “Miscellaneous”.

In its objections, the office noted that the proposed design was not a design as defined under section 2(a) and 2(d) of the Designs Act, 2000. Section 2 (a) and 2 (d) define an ‘article’ and a ‘design’ respectively.

As per Section 2 (a) “article” means any article of manufacture and any substance, artificial, or partly artificial and partly natural; and includes any part of an article capable of being made and sold separately;

Section 2(d) of the Act provides at least the following conditions, amongst other things, which should be satisfied for the design to be registrable:

In response to objections, Amazon submitted that the test for registration of a design is to determine whether the subject matter of the design application is a design under the provision of Section 2(d), which is applied to an article, as defined under section 2(a). Amazon noted that the above provisions, more specifically the definition of an article as provided under section 2(a) of the Act, do not prescribe a separate determination as to whether what is sought to be registered is an article or not and the subject matter of the present design application i.e. a screen display having graphic user interface for providing supplemental information of a digital work, is registrable under section 2(a) and 2(d) of the Act.

Finally, it was submitted that the Act provides, in the Third Schedule, for classification of such designs and articles, i.e. screen displays and icons (under class 14-04)- implying that the Act does not intend to exclude such subject matter from design registration.

Decision: The controller while refusing the application held that:

A review of the published journals of the Patent office reveals that certain screen displays have been registered in the past under Class 14-99, titled “Miscellaneous”. For example, the following screen displays and icons are registered: 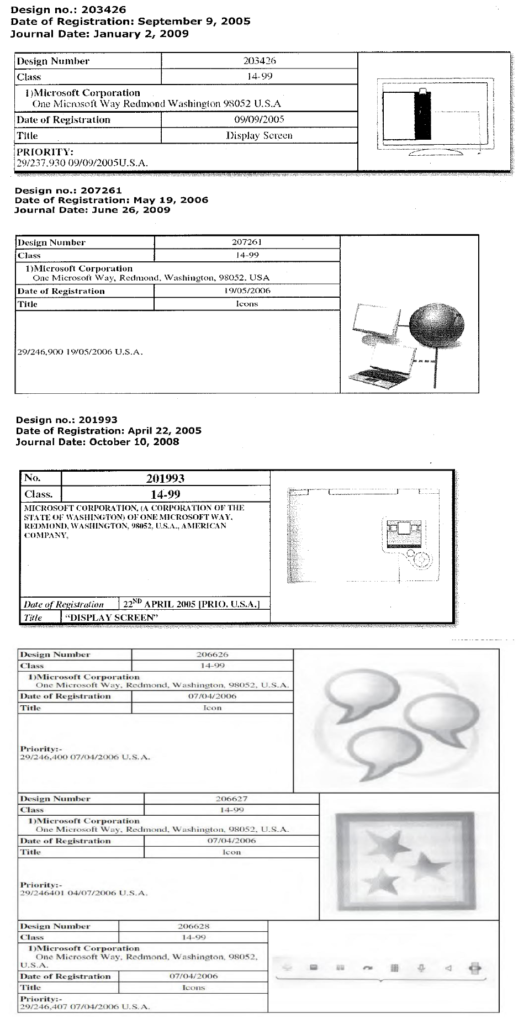 Pursuant to decision in Amazon’s case, the Patent office has now taken a strict interpretation of the definition of the word „article‟ in the Act and it can be concluded that no screen display could be registered. Thus, it seems that while new classification system has acknowledged the eligibility of screen displays and icons to be registered under the Design law, the old definitions of article and design in the Act continue to bar such designs from getting registered. Such dichotomy is unique to India as other countries which grant protection to GUIs under their respective design laws, have amended the laws or their examination processes to specifically allow GUIs get Industrial design registration. For example, China recently amended its Examination Guidelines to allow electrified screen designs or user interfaces to get design patent protection. Accordingly, SIPO now allows design patents to be granted on Graphical User Interfaces (GUIs), including GUIs that are animated (dynamic).

To sum up, until Government amends the definitions of article and design in the Act to make way for new age communication devices and their embedded applications-design eligible, the fate of pending applications with the Indian Design office in relation to GUIs seems uncertain.

Please follow and like us:
Tweet
India – FAQs on trade mark oppositionsTrade Marks Registry issues guidelines to file application for declaration of a trademark as “well-known”